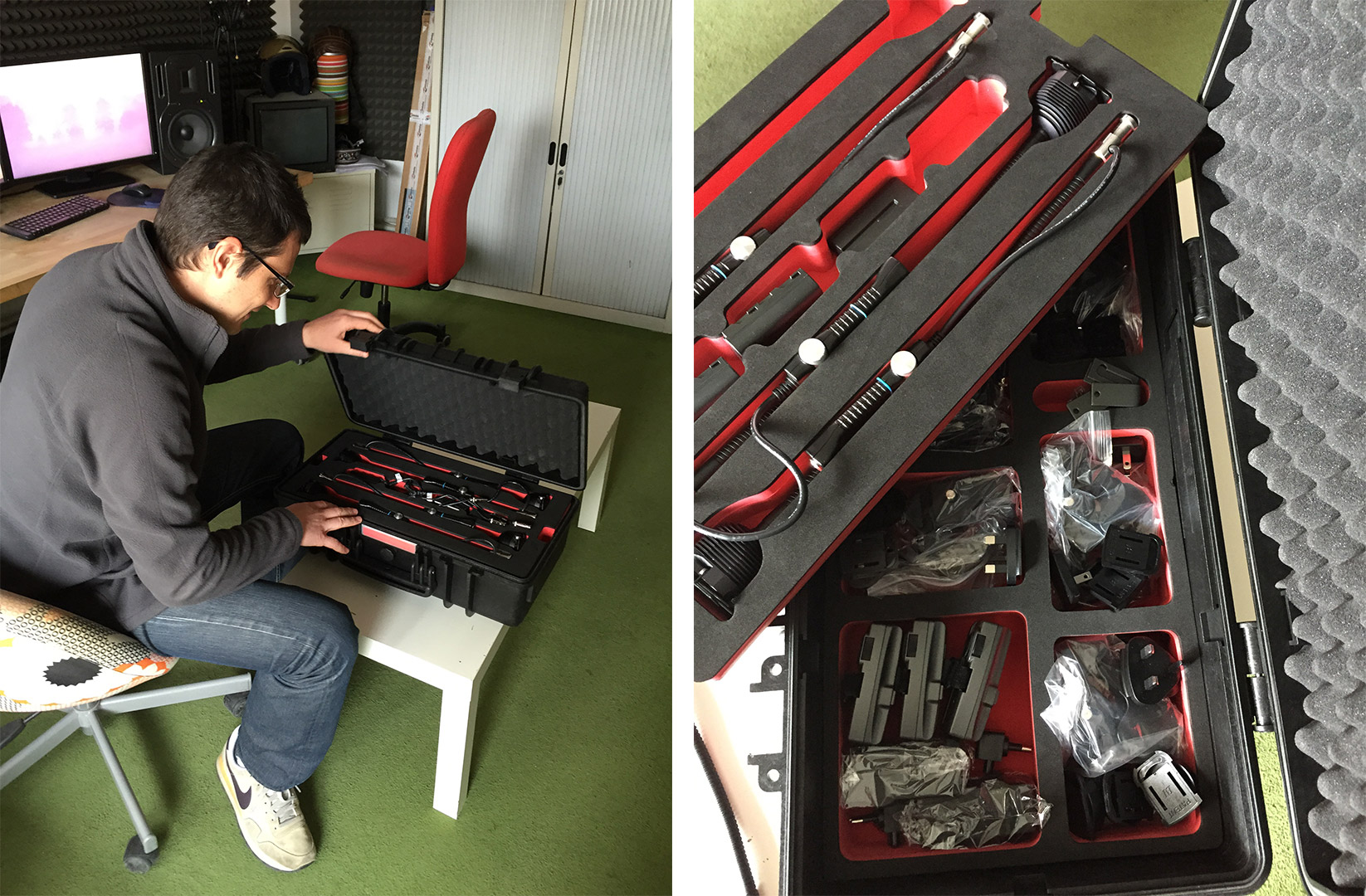 I have recently bought a set of lights called “Scorpion Lights” that I’ve been watching closely and, although I would have liked to see how it acts, looks and feels before buying, I didn’t get the chance because I guess Parcfilm is the first and only Romanian company that owns this product at this moment (may 2015).

Everything started one year ago with a newsletter from nofilmschool.com through which I found about a Kickstarter project that sounded very interesting. Some guys in UK called “Blindspot Gear” were about to start producing and selling these “Scorpion” lights which featured, at a first glance, very interesting specs.

What are they, actually: LED sources with a reasonable power (I didn’t measure the light intensity) with a long and flexible “goose neck” and you can mount them virtually anywhere thanks to a well built clamp – from door knobs to shelves. Of course you can also put them on a classic light stand with a simple adapter.

They are 100% dimmable and work both on batteries or AC power. Bright! For me, this is exactly the type of versatility that I was looking for. They fit in a small dimension Pelican-type case in which they are very well protected – you’re not afraid of throwing them in the trunk of your car.

Opening the strong case with which the kit is delivered. There are two levels inside.

Complete details about the kit and full specs can be found on the site of the manufacturer – http://www.blindspotgear.com/the-scorpion-light/.

So, what did we do, shortly after the arrival of the kit? A small test, of course!

The test was made especially to test the portability and ease of use of the lights. So we decided to move from the office to the place of testing using only bicycles. Exactly: all we used was a back pack and a bicycle basket. So actually one man could carry all the stuff to the place of the shooting. So you don’t need more than that to make a well-lighted interview, in the night, anywhere on the planet. Because we used batteries, of course 🙂

A small bag containing the camera, lens and the 4 lights kit with grip and batteries 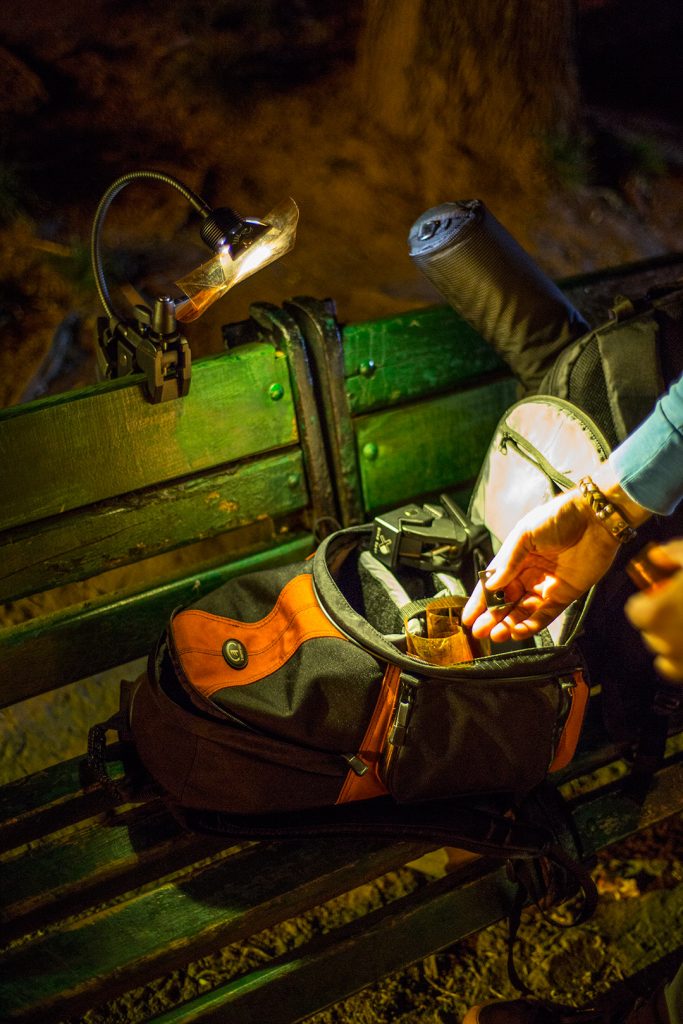 Setting up the lights in the park

Annoying the people walking in the park at that hour and the joggers, we used the four lights in the kit to light the main character (me) on the bench and to create some light effects on different objects in the frame: a bicycle and a bush that was very far away.

We made the test with no light stands so we mounted the lights on all kind of stuff: two of them directly on the bicycle frames, one of them on the bench and the fourth directly into the grass. 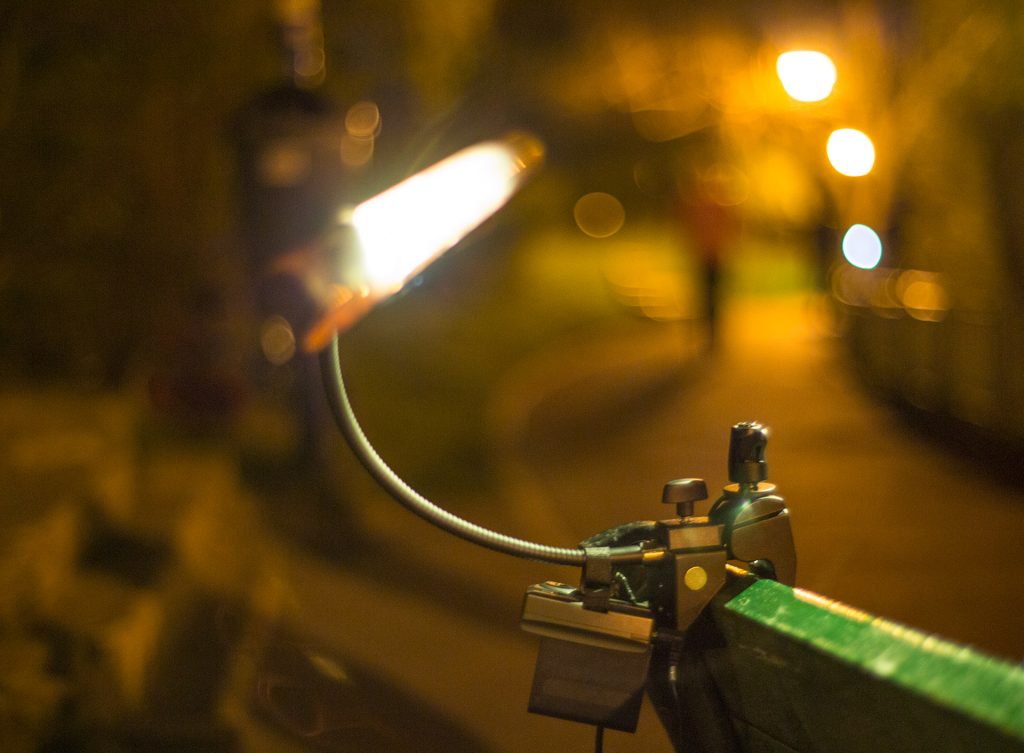 So we used one source as a keylight, another one as a kick light from behind the character (attached on the bench) and two as effect lights: one on the bike, one on the bush.

During the test (and as a final proof of the ease of use and lack of stress in using these lights) my 6 years old son was with us – walking around, getting bored and playing ball while we were making the test 🙂

I’ve never made a filmed light test before. With no knowledge in this area, the logic in the next film is as follows: we started with all lights on, indicating each one’s position. Then we turned them off one by one. And then back on. To make it clear.

I think it’s also important to talk about the color accuracy of these lights. Well, I don’t have any precise information on this. In the park where we filmed there’s a mess in the light color temperature because of the sources they use there. The white balance of the camera was set to tungsten and we used CTO gels on the lights as the LED sources I bought are daylight. There might be a tiny green tint but is solvable with a magenta filter or you can solve it in postproduction.

By the way, there is no color correction on the film. We used the Cinestyle picture profile, the footage is just as it was shot, straight out of the camera.