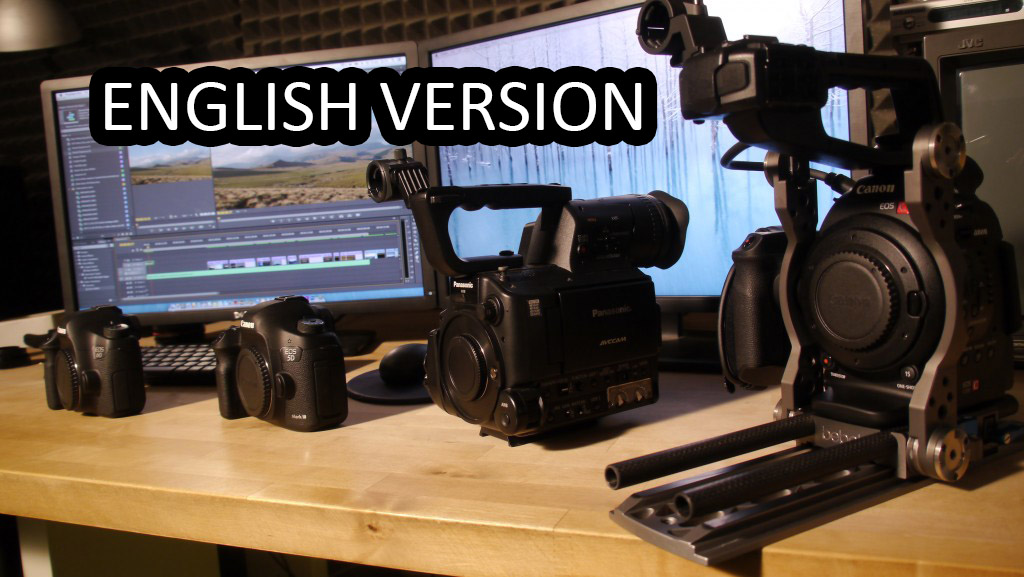 This is the English version of the article. Pentru varianta in limba romana click aici.

This is a test I’ve been planning to edit for a really long time, as it was shot in December 2013, but edited only in March 2013:) Well, better later than never.

So, where it all started from: back then I used to own different cameras that I was using for different projects. I had four cameras, but all different: Canon 5D Mark III, Canon 6D, the video dedicated camera Panasonic AG AF 100 and the small and very efficient Panasonic GH2 (which I still use). There were projects where I had to use two cameras and of course they had to match in the end. 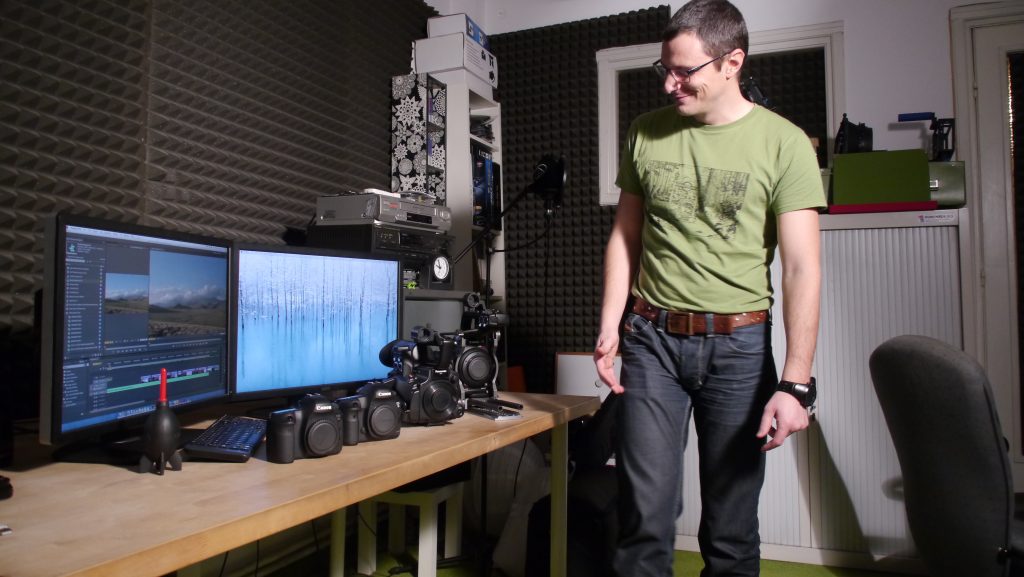 What camera should I use today?

For such projects I used the AF 100 as a main camera – because of the sound inputs – and Canon 5D as a secondary camera. Everything fine until the post production – sometimes it was a nightmare to match the colors of the cameras. So I decided to make this test to see which color profiles are the best for matching the 5D with the Panasonic.

I made this test together with Istvan Bordi, a DP who had access to a Canon EOS C100 camera so we thought “let’s test them all together in order to have a wider view of the comparison”.

Changing lenses on the Panasonic

The man and the camera.

I accidentally had a cloth sample at the office that we used for the test – it turned out to be very useful because of the patterns and the colors – they would reveal important information regarding how each camera interprets the colors and the moire problems that occur.

The test was made using two lenses: for the wider shot the Carl Zeiss Planar T* 1.4/50mm, and for the tighter ones – Carl Zeiss Makro-Planar T* 2/100mm. Of course we tried to maintain the same settings for the cameras as much as possible. It was not always possible due do their sensor differences. 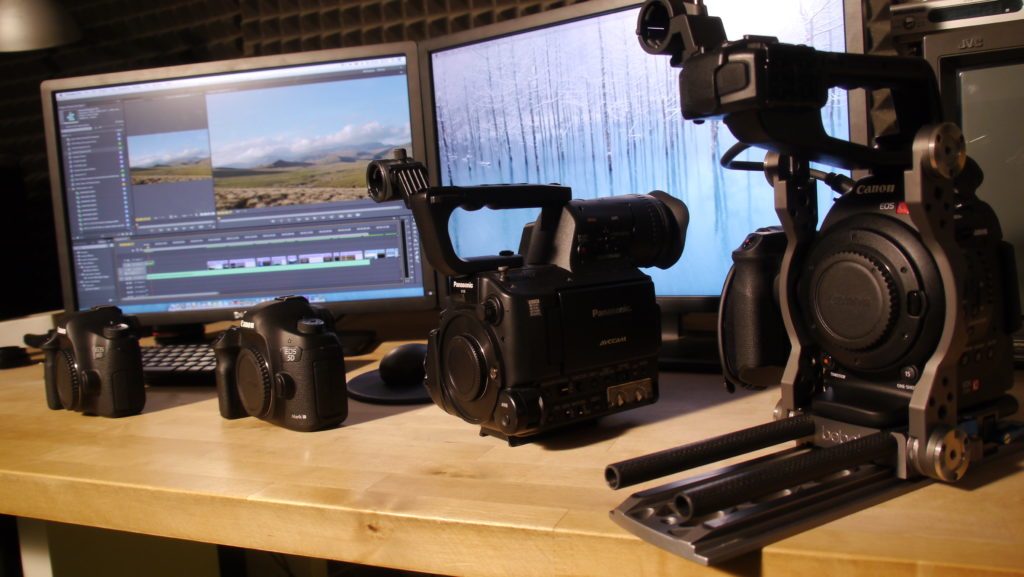 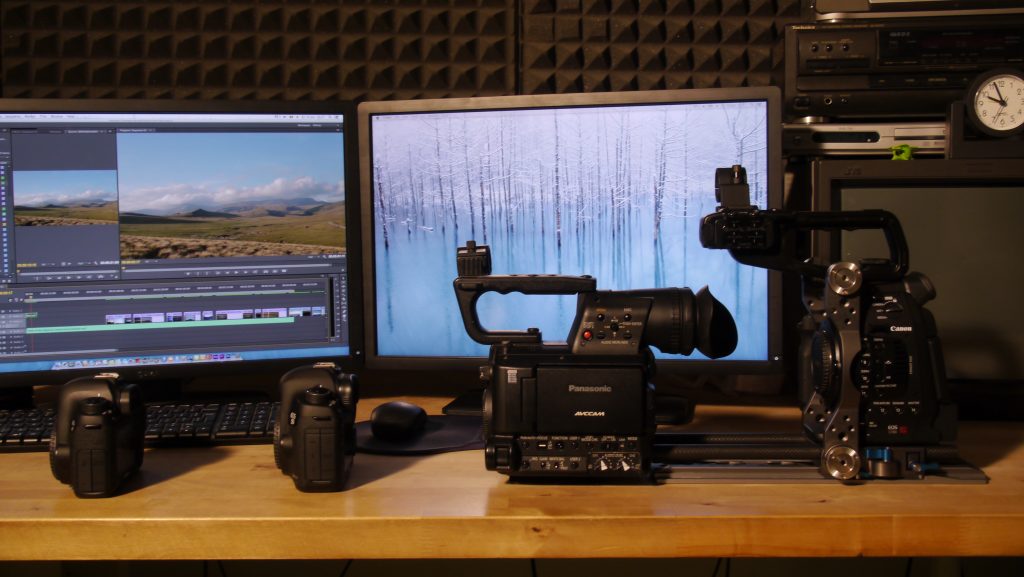 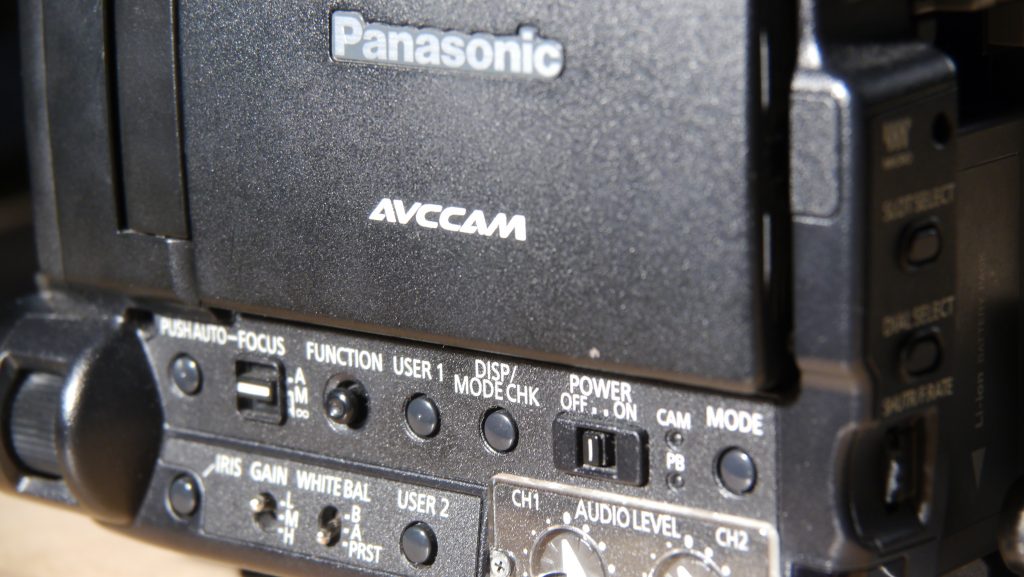 The side control panel of the Panasonic AG AF 100

Watching the material revealed a lot if interesting facts about the cameras and it changed what I previously thought. Before we did the test I had a completely different opinion on the classification of the cameras or which would be the best one. For example, I had the misconception that the Canon C100, being a dedicated video camera and the newest on the market, would be the best of four at all chapters. Well, it turned out it’s not at all like that.

First of all we invite you to watch the test and then see our comments below:

The moire patterns that we saw on the Canon C100 and even worse – on the Canon 6D were unbelievable. Meaning that I didn’t expect too see more moire on a C100 than on a 5D Mark III or Panasonic Af 100. At this chapter the chart is pretty obvious:

I think the first place is disputed by the Canon 5D Mark III and Panasonic AF 100. One more comment here regarding the image quality / resolution. Although for years I thought the image quality that came straight out from the MK III was better, this test makes you rather think that the resolution of the Panasonic is better. Strange; all the footage I have (shot with both cameras) made me think the Canon had a better resolution, but look at this test! I didn’t make any zoom in the image, I’m just saying this judging what the eye sees naturally, and in the end this is what matters.

Then on the second place comes Canon C100 followed by Canon 6D. The 6D reveals some really ugly moire patterns if you look carefully on the left panel, below the middle of the image.

The best of all four cameras – Panasonic AF 100. I want to specify that this test was made on the first Panasonic AG AF 100, not on the new upgraded one that supports 50fps. The least rolling shutter issues by far.

Then second comes Canon 5D Mark III, followed, on the third place, by C100 and 6D. I think they are both really bad.

I hope this test helps you make right decisions regarding the cameras. There is a lot of misconception on the market, a lot of rumours, snobbery and maybe this test is a little helpful. Of course the test doesn’t say anything about the quality of the image-straight-out-of-the-camera and other features that might count.

Our solution: although the test proved the Panasonic as the best camera, we sold it already. At this point the best and easiest solution is matching the 5D with the 6D, both using Cinestyle picture profile. It is the best and perfect match, we don’t need to do anything in post production. We apply just the same settings most of the times in terms of color. Of course, they may differ in terms of light (exposure), but that’s all. No other issues. This is the best solution we found as we wait for new investments: the next camera on the horizon: Sony FS7.

And in the end, I hope you will excuse the different picture profiles we used to take the pictures illustrating this article:)