The launching video of "People and tastes" website - Parcfilm 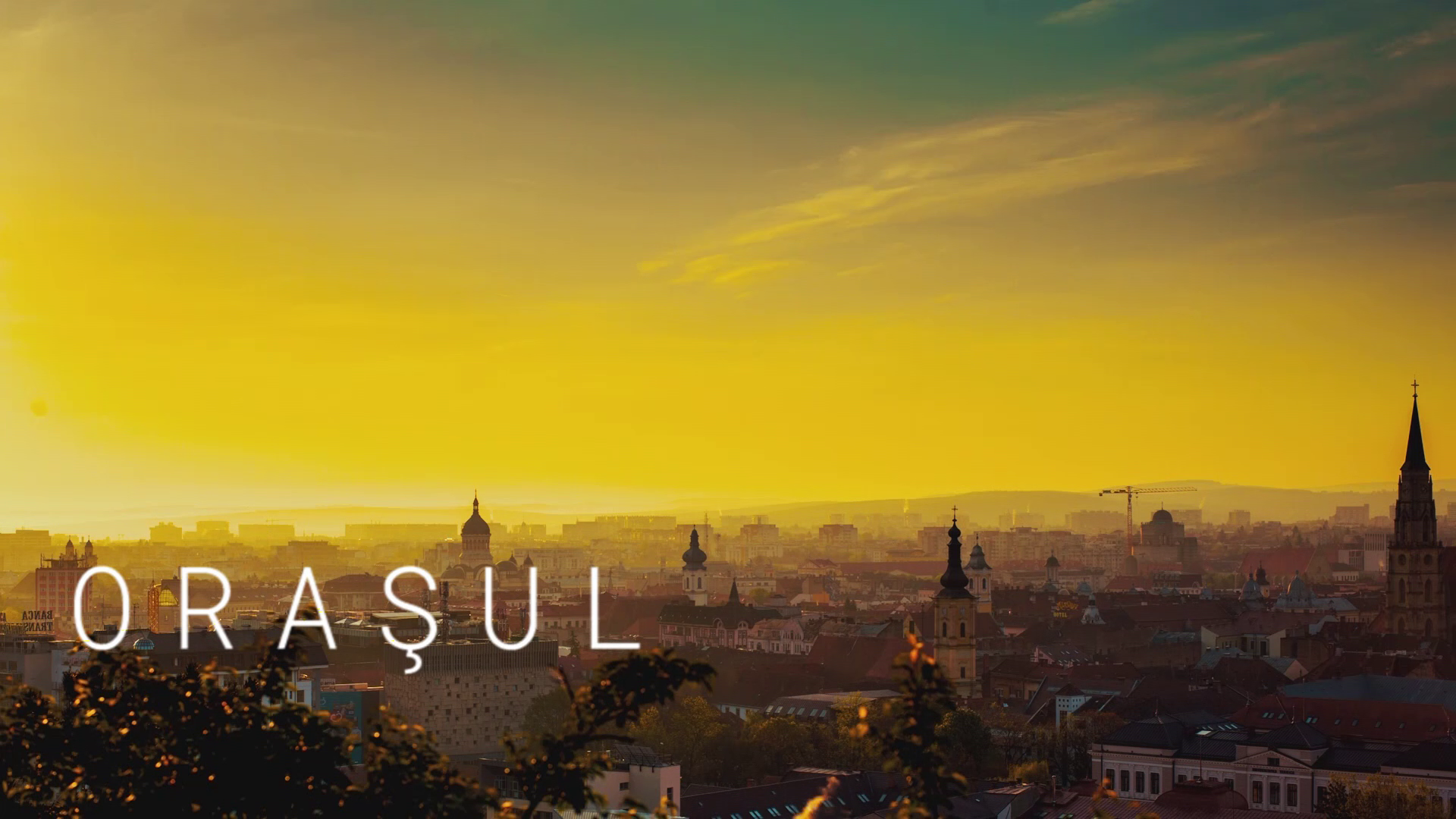 Staropramen beer and V8 Interactive agency chose Parcfilm and Tudor Hristescu as a director – at the end of 2016’s spring – to create the concept, the treatment of a project full of flavour: the film that would launch the new platform “People and tastes” (Oameni si gusturi in Romanian).

The video was supposed to cover, in imagesm, all the subjects that the platform would write about: music, film, theatre, dance, photography, painting, books and food. How do you do that in just 2 minutes?
Well, long story short, this is how (and the rest of the story is down below):

The city and the people, their tastes and cultural preferences, all in one place without leaning too much over a subject or staying too much in one city. This is what we tried to do in the above edit.

There’s been a loot of shooting – over 10 shooting days in Bucharest, Cluj, Sibiu. Many hours of shooting for just seconds of the video that one might not even notice at a first glance. Waking up at 4 am si sunrises, aerial shooting at sunset, waiting for beautiful days with fluffy clouds – this was our quest for painting the beauty of the cities and of the people.

One of the nicest places we got to was the attick of an old school in Sibiu / Hermannstadt where, through a tiny window we managed to catch some spectacular time lapses with the setting over Sibiu city and Fagaras mountains, in the background, covered in snow. In order to cover all possible angles, 5 cameras worked simultaneously in different directions and framings: Nikon D5, 2 x Canon 5D, Canon 6D, Panasonic GH2 + some Lee filters. 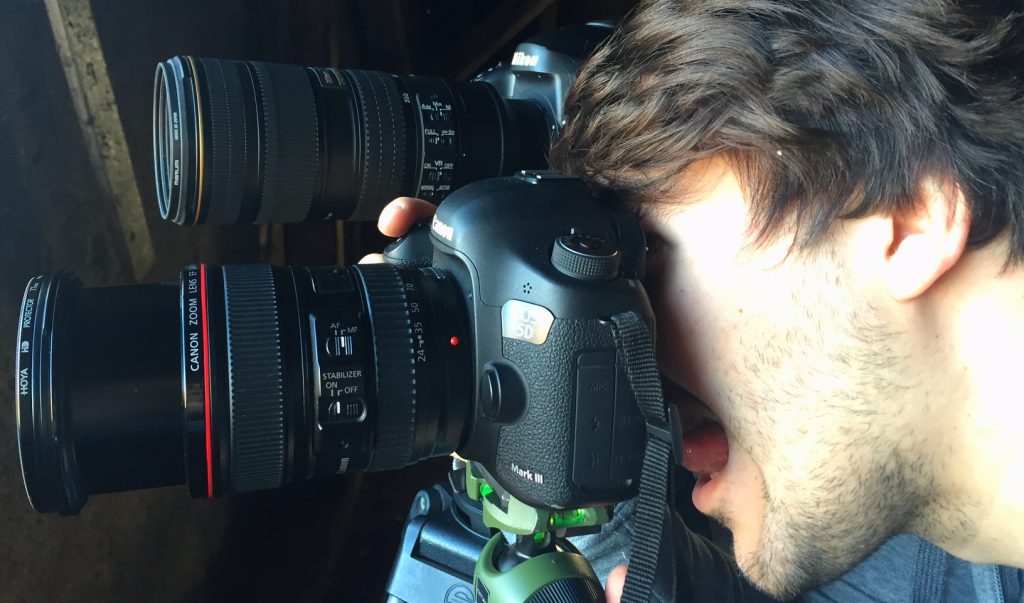 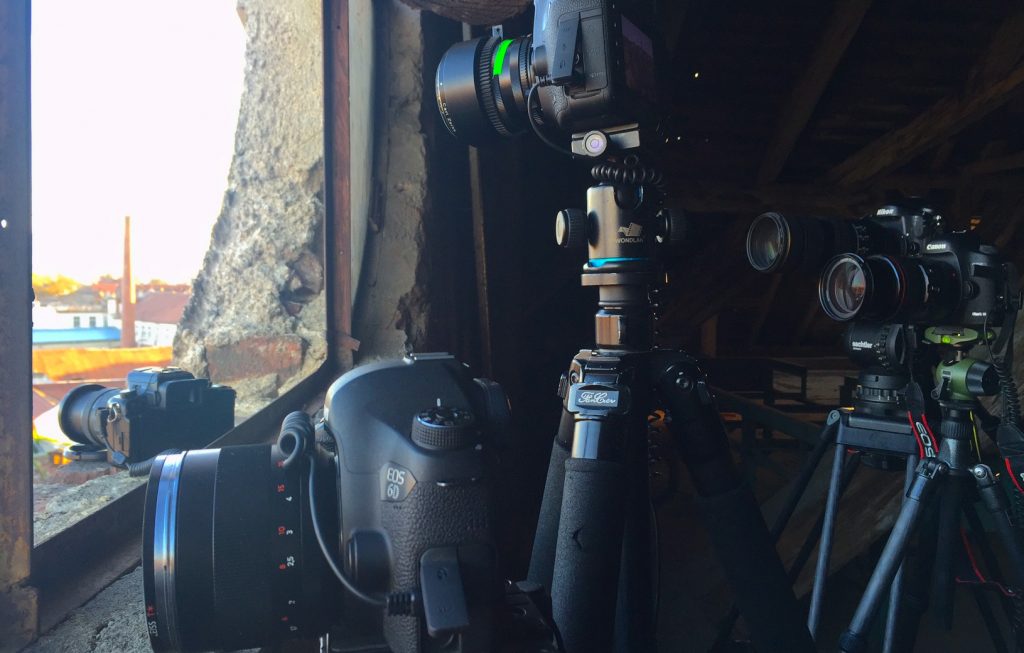 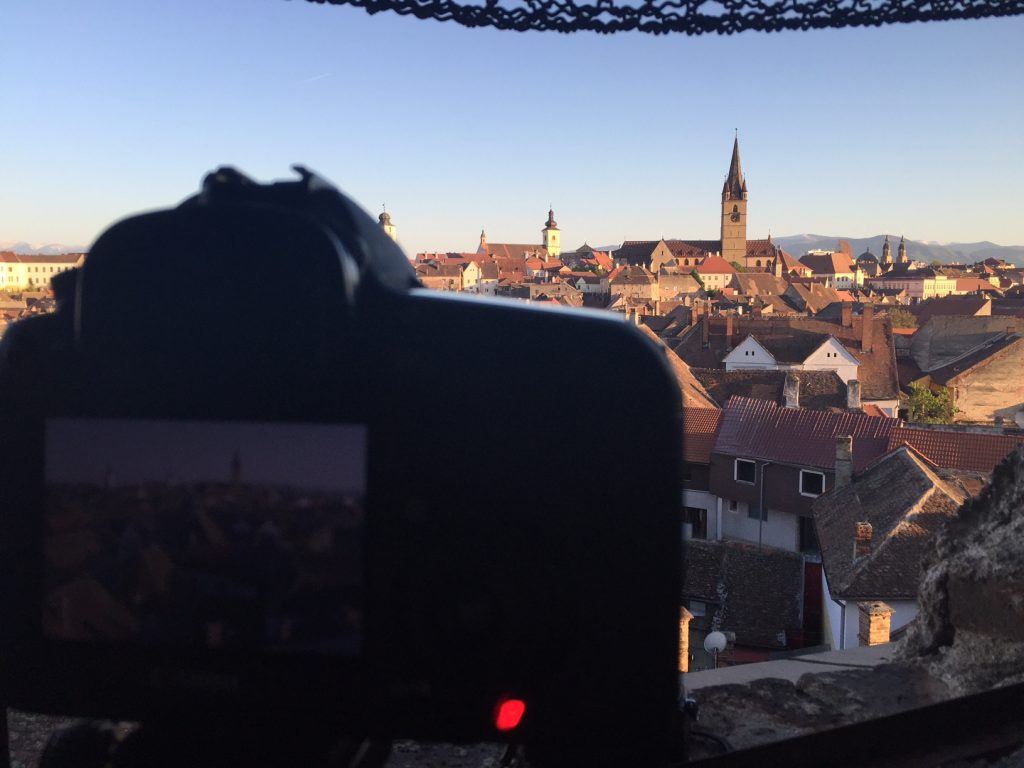 Sibiu, a view over the old town. 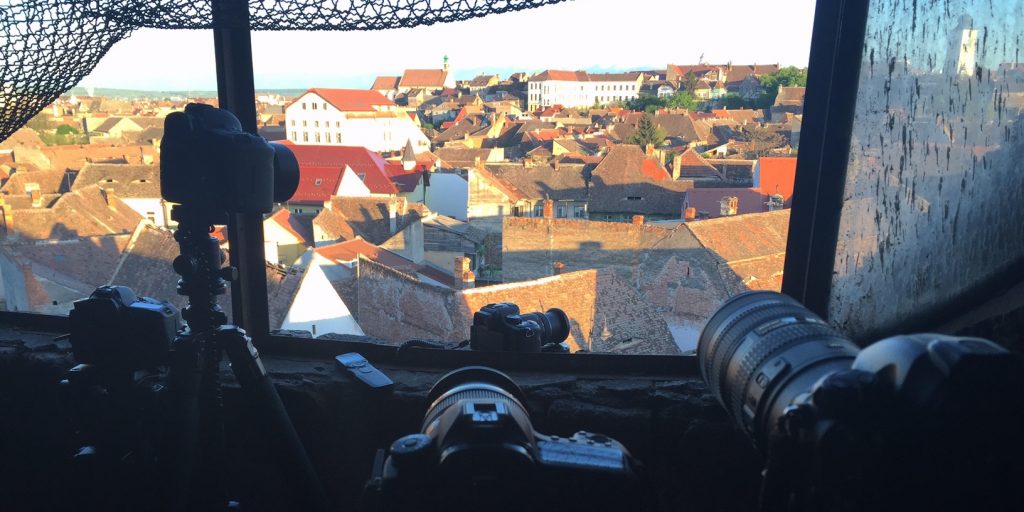 Staying close to 5 cameras working on timelapses in the same time was like music to our ears 🙂 A lot of “click clack”, same tempo, for hours. That’s what timelapses are all about. Poetry!

In terms of sunrises, this is always more complicated because… you just need to wake up in time 🙂 But once you’re up there, on a hill, or on the top of a building, on a mountain or wherever, those quiet moments passing by while the light conquers the dark are magical. The birds are singing, the leaves are getting powerful colours, and when the sun rises everything becomes so beautiful…

Many times, during the editing process, you feel like viewing over and over again the same timelapse and get the impulse to show it to the people, ponting to a lot of details like “see that house, how the sun enlightens it??” and so on. And in the final edit, a maximum of 2 or 3 secconds of all those hours spent put there.

In Sibiu, waking up in the morning was partially solved by the position of the hotel room that had windows towards Piata Mare (The Big Square). So we left the cameras out, in front of the window, and set them to start shooting at 5 AM. The picture below is made at 8:30 AM when I went out to get the cameras back (good thing I used the lens heatters). The only “horror” surprise was that, while watching the footage, one of the frames was showing a bird trying to knock down the camera. Luck me she had no luck in doing that, as the camera was just left out there, no tripod or other insurance. 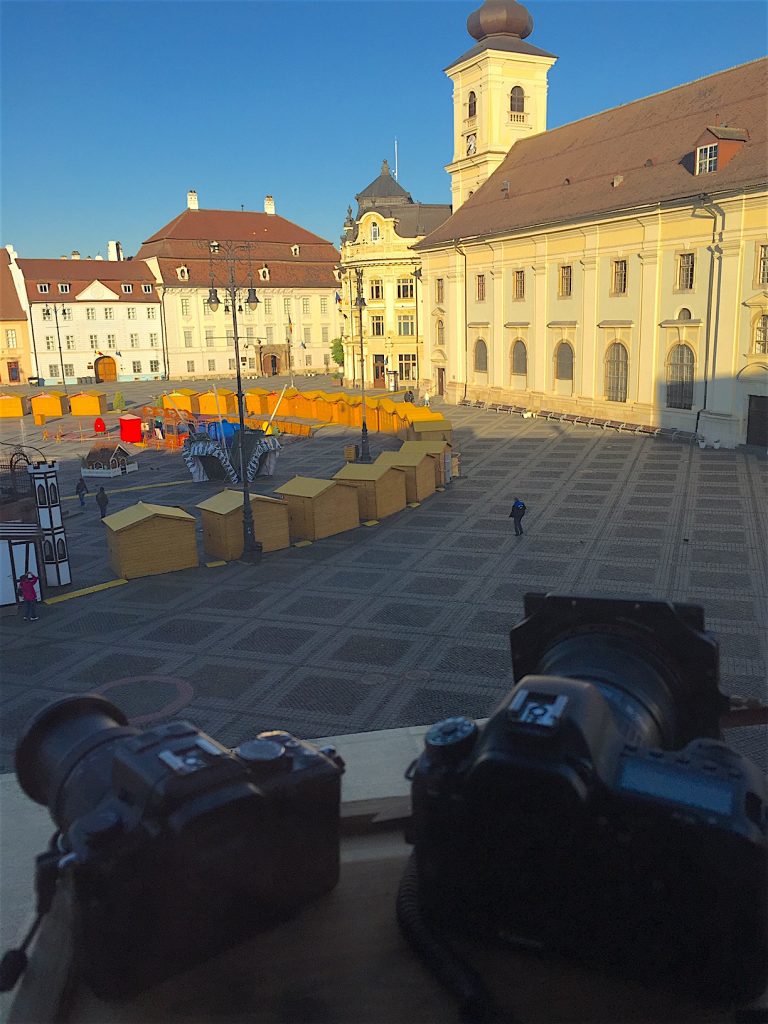 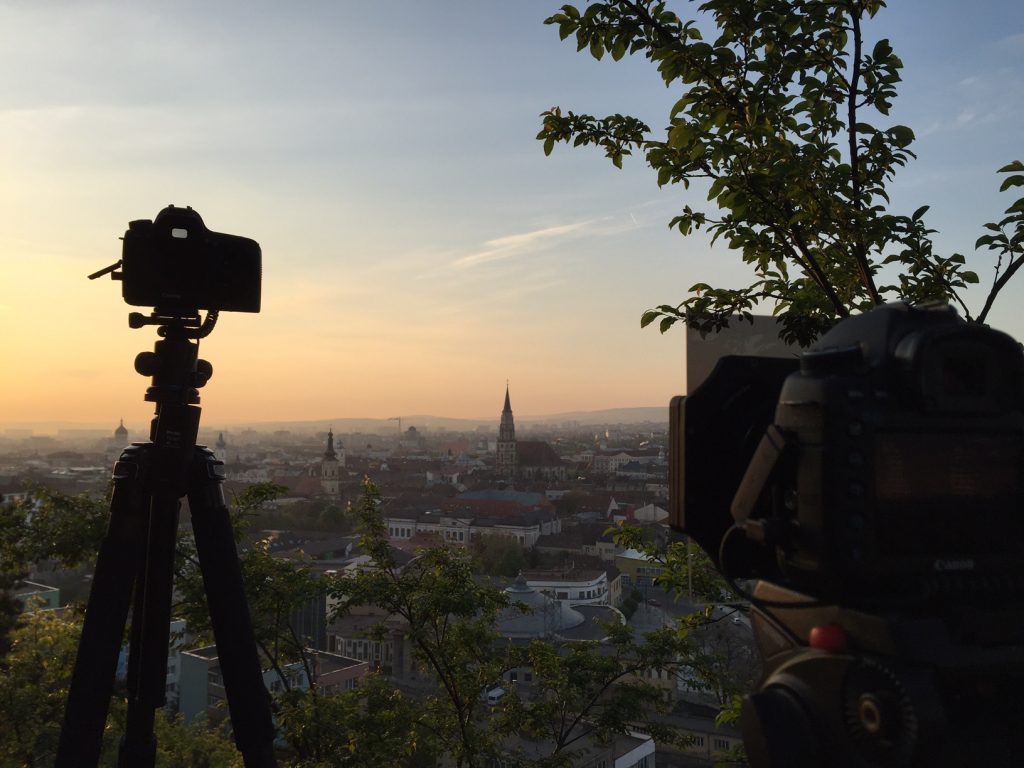 Three cameras waiting for the sun to rise in Cluj city.

The places we walked through were beautiful, but even more beautiful were the meetings with all the people we filmed around the country …

Let’s start with Bucharest, the place we left from and returned to with the filming. One of the friendliest locations was Carturesti – Carousel in the old center, a place with an unmistakable visual imprint, where Anca Dănilă greeted us and walked us around. We must also thank Iza Diaconescu there for being patient with us and “playing” in our spot.

Another special man we thank is the painter Suzana Dan, whose workshop near Amzei Square received us on a warm afternoon; hence the sequences with brushes and watercolors.

The Bucharest National Theater also had a serious contribution to the content of the spot, where we managed to film many sequences through Andreea Nae, who facilitated our access through all the dark corners, as well as to rehearsals.

But it wasn’t just about culture in Bucharest! We will never forget the wonderful sandwiches from Peste Paine enjoyed with a glass of wine during the prospecting. And we will not forget the ones from the filming, beautifully arranged by Chef d’Artagnan.

Also in Bucharest we have to thank the National Dance Center, more precisely Andreea Capitanescu and Alexandra Dancz who helped us both with access to rehearsals and with images already filmed from some shows that we failed to reach.

At Cafe Godot I received the agreement to film several plays thanks to George Remes. What a shame that we had to film and not sit in a chair and admire the plays!

The second city as a share in the image film made for popolisigusturi.ro was Sibiu. Here we had a super bike guide – Cornel Mosneag, who played the role of a photographer walking through Sibiu in search of beautiful places to take pictures. By the way, Cornel also deals with photography in his free time.

A day full of many, many frames – which can also be found in the film, by the way – I spent at the Sibiu Ballet Theater. Here Mihai Zugravu facilitated our access to the band’s rehearsals. Very beautiful and talented people.

From Sibiu we went far to Cluj, where we arrived at the Jazz in the street festival – we got lost in the streets looking for the bands that sang in the most chic places, we filmed all the inscriptions on the walls. Corina Brandusean guided us and put us in touch with the bands we were able to film – many thanks!

Besides all these, there were many others with whom we discussed the possibility of a filming, who helped us, they were jumping, but unfortunately things did not connect and we did not manage to reach them. Thanks to them too!

The story of the film was conceived and directed by Tudor Hristescu (including time lapses and aerial filming).
Andrei Oana, in charge of the camera and the final image of the film, and Alexandru Mihai as additional camera.
The magic of editing belongs to Alexandru Capatoiu.

0 0
No Comments
Triathlon Series: the board game. The video.
Nalu Underwear – image film